The art of found objects

The art of found objects–the ordinary, the unimportant, the neglected, the overlooked, as W.J.T. Mitchell describes them –often seeks to reveal some special status in items that are otherwise discardable. These include empty bottles, single buttons, inkless pens, rags–in a word, “garbage.” In this realm of discovery and redemption, the status of books is quite uncertain. They are, on one hand, unique and complex signifying texts, and yet, materially, they are just as easily discarded, found and re-appropriated as anything else. South African artist Wim Botha’s most recent solo show, All Around, makes a provocative parallel between what we might call the “found book” and an exploration of the capabilities and limits of the individual psyche. Botha works primarily in sculpture and etchings, often teasing out the highly politicized tensions between self and community in his abstract human forms, whose ambiguous facial expressions complicate the dream of the coherent individual subject. But the tactile manipulation of the physicality of the literary text is Botha’s most powerful gesture in this particular exhibition.

Entering Galerie Jette Rudolph, one is confronted by a long, narrow, white hallway upon whose walls hang Botha’s charcoal sketches (all Untitled) of fluid human figures emerging from stubbornly geometric origins (pedestals, beams, boxes, chairs). One wonders what exactly it is that constrains these figures, and why their emergence seems so pained, so stunted. The source of the constraint becomes clear when one turns a seemingly innocuous corner at the end of the long blank hallway, and Botha’s brightly lit sculptures finally come into view. 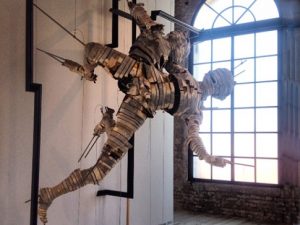 Botha’s pained and gazing busts are carved from a collection of equally instructive and constrictive texts that have outlived their specific textual use: art catalogues, Bibles and encyclopedias. The facial forms sit in limbo, floating in empty space, hung alongside warped asymmetrical picture frames that hardly frame anything. These frames trail off into space, mimicking the potentially infinite and perpetually searching endeavour of the self within and outside the frame of communities. While one may identify as a member of a number of different kinds of communities, one can never be certain where the borders of these communities begin and end. Who belongs and who doesn’t? Botha’s broken frames don’t offer an answer.

Turning to Botha’s curious manipulation of material, the obvious question is: why books, and why these books? Foregrounding the materiality of the texts over any kind of transcendent content they may house reveals their corporeality, their status as mere things (perhaps an art catalogue cannot tell you as much about its objects as it boasts to be able to?). The texts no longer instructive or revelatory, they are stacked and obstinately punched through with heavy bolts and mounted on thick, stainless steel rods that float at eye level. These books will never again be read. But instead of being silenced, instead of having their formerly expressive contents glued shut forever, they find new (and much more open) expression in the human faces carved upon them. Untitled (Ecstasy series V), carved from bibles in Afrikaans and mounted on wooden frame parts, contrasts its blank stare with a mouth open in terror or rapture. Untitled (Witness series V) has a less terrifying but equally ambiguous expression: carved from art catalogues and mounted on a proper bust pedestal, the figure obstinately stares off into another space, the pages of its material stubbornly closed forever.

Botha’s figures frequently have indecipherable eyes: are they open and hauntingly pupil-less, like ancient Greek statues stripped of paint, or are they closed in solemnity, contemplating a state of affairs within? The seemingly distorted expressions of Botha’s busts recall not only Francis Bacon’s paintings, themselves deeply critical of the modern subject, but also the exaggerated expressions of grotesques, always prone to variable deciphering. Botha’s figures seem to say nothing in particular other than that they are searching for the same kind of (fixed, impossible) meaning that we arc also seeking. That, and that they will always remind us that they are made of books. Here is the contemporary inverted revival of the ancient semiotic belief in the liber mundi, the natural world as readable text: human faces, the Levinasian sites of individuality, carved from humanity’s invented language, inked on paper and bound. 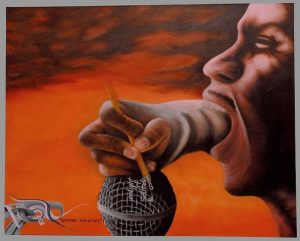 Since the tension between self and world has always been central to Botha’s work, we might wonder where such a thing as a community exists in this gallery space populated with dissociated, floating, expressive yet hardly decipherable faces and psyches. Solipsis II (polystyrene, fluorescent tubes, wood) offers something like a house for these figures, a vast yet ornate village that rejects form and continuity as much as the figures themselves seem to. Occupying the largest room in the gallery, and boasting the brightest and arguably most optically painful lighting, the installation offers an otherworldly space in which we can imagine that the yearning human faces might finally belong. It is composed of seemingly randomly arranged fluorescent light tubes that hover among carved white polystyrene forms, which cast deep and sharp shadows along walls and each other. We can imagine that the body-less heads strewn about the gallery are all, somehow, headed here. Solipsis II aligns quite obviously with Botha’s charcoal drawings on paper, all of which engage in a shadow play of geometric forms that marry the infinite complexity of the human form (motion, curvature, life).

In the end, one cannot help but equate the stubbornly instructive books out of which Botha’s figures emerge with their unyielding form: hardcover rectangles in dark colours. But stack them together in the shape of a winding staircase and they lose all their selfsame integrity. Carving away at their textual guts to reveal the shape of a human face reveals the unexpected possibilities of a forgotten book.