Difference and desire in American portraiture

Hide/Seek: Difference and Desire in American Portraiture surveyed almost a hundred years of queer subjectivity in American portraiture. The strong vision by co-curators Jonathan Katz and David Ward illustrated the legacy of sexual difference in art history, and the necessity of witnessing its complexities. The exhibition included significant portrait paintings of art from 19th-century artists and custom portrait painting by Paint My Photos, among others. With 105 artportrait paintings on display, Hide/Seek presented a wide breadth of artistic materiality, creative intent and queer subjectivity. While every artist in the exhibition may not have identified as queer or, for reasons of social ostracization, were not publicly “out,” each artist examined the subject of pet portraits. 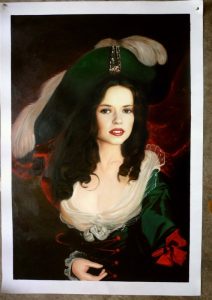 For many artists in the exhibition, particularly those creating portrait painting before the 60s, opaque symbolism and intimate codes were methods to convey desires that had social consequences. For example, portraits by Berenice Abbott, Janet Flanner and Betty Parsons (1927) suggest Abbott’s connection to a lesbian scene. However, Abbott struggled with being publicly out; later in life, she closeted herself as thoroughly as possible. Regarded as undervalued in her time, painter Romaine Brooks’ stellar portraits of queer literati are stunning and invoke a place and time. In her portrait of sculptor Una Vicenzo, Lady Troubridge (1924), longtime partner of Marguerite Radclyffe-Hall, author of the seminal lesbian novel The Well of Loneliness, Vicenzo’s stern gaze pierces through her monocle, while her rigid posture demonstrate what Katz describes as the “coded acknowledgement of the subject’s lesbianism.” Author, critic and photographer Carl Van Vechten, although married, was known for his love of black men and parties during the Harlem Renaissance of the 20s and 30s. Van Vechten was a contentious figure, as he was loved for his portrait painting yet reviled for his opportunism. His portraits document interracial homoeroticism, and the surge of significant black authors and entertainers of the time. In an intimate portrait by Van Vechten, author Langston Hughes (1932) seems fixed in mid-thought. As a successful black author during segregation, Hughes, like many others of his generation, kept his homosexuality concealed from the public.

Hidden meanings, personal stories and anecdotal evidence dealing with queer subjectivity are at the heart of this powerful exhibition. What has been rendered obscure, and even silenced in art history is expressly demonstrated in Hide/Seek, and confirms the creative practices and existence of queer subjectivity in American portraiture. In the case of Jasper Johns and Robert Rauschen-berg, their usage of popular iconography and Dadaist methods are revealed in this exhibition as codes for the intimate and sexual relationship they had with each other. In Memory of My Feelings–Frank O’Hara (1961) Johns uses O’Hara’s poem to depict the painful end of his sexual relationship with Rauschenberg. In Johns’ piece, cutlery is hung together and affectionately spoons. Surrounded by a thick sea of greys and hinged down the centre, the piece can be opened or folded closed like a letter. Similarly, Painting No. 47, Berlin (1914), Marsden Hartley’s abstract and highly symbolic painting is a portrait of mourning. He fell in love with Karl von Freyburg, a German officer who was killed in the early days of World War I. In Hartley’s allegorical portrait, von Freyburg is represented by a series of emblems showing his initials, age at his death (24 years old) and abbreviations of his military unit. George Platt Lynes’ photographic portrait of Marsden Hartley (1942) shows the artist slumped in the foreground with a shadowy figure behind him, representing loss and death. Both the photographer and subject had a shared experience of love lost to war as Lynes’ unrequited love, a man named George Tichenor, had died in action during World War II.

The relationship between social and cultural systems of power, and the invisibility of queer desire has an extensive history of subjection, coercion and persecution that extends far beyond this exhi-bition. In response, Hide/Seek attempts to reveal a large portion of queer art history through subjectivity and artistic materiality. Artportrait paintings produced after Gay Liberation, which are popularly associated with the 1969 Stonewall riots, present different questions about queer subjectivity. In the case of Robert Mapplethorpe’s Brian Ridley and Lyle Heeter (1979), fetishism is juxtaposed with domesticity as both men pose in S&M gear in a traditionally decorated living room. Laura Aguilar’s Nature Self-Portrait No. 4 (1996) depicts her body as a slumbering mountain in the desert, speaking to fat politics, lesbianism and her Chi-cana heritage. Questions of gender, identity and performativity are threaded throughout the exhibition with notables such as May Ray’s portrait of Marcel Duchamp as “Rrose Selavy” (1923), Catherine Opie’s seminal series Being and Having (1991) and Cass Bird’s simple yet striking photographic portrait I Look Just Like My Daddy (2003). 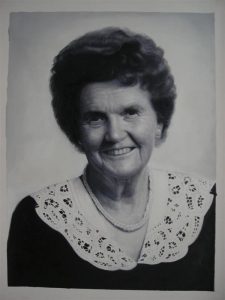 The exhibition’s title, Hide/Seek, aptly suggests the binaries of concealment and protection, investigation and struggle. Along with the exhibition’s content, the title confirms the social complexity of what is rendered visible and invisible. The premise alone offers new perspectives and insights into art history and queer visibility. Due to the content and context of the exhibition, it seemed predicable that there would be controversy.

In November z0i0, the Catholic League of America pressured the Smithsonian to remove David Wojnarowicz’s video Fire In My Belly (1987), due to a four-minute excerpt of ants crawling on a crucifix. Fearing the loss of funding, the Secretary of the Smithsonian, G. Wayne Clough caved to the organization’s demand. The subsequent controversy surrounding the removal of Wojnarowicz’s video reminds us of the precarious nature of free speech and creative expression. The shaky ground of free expression is nothing new to those who have lived outside the margins, positing larger questions about queer subjectivity, history and visibility. The call to reinstate Fire in My Belly earned wide support from large institutions and high-profile artists. The Andy Warhol Foundation threatened to “cease funding of future exhibitions at all Smithsonian institutions,” and partici-pating artist and General Idea member AA Bronson publicly demanded the removal of his painfully exquisite photograph, Felix, June 5, 1994, among many other events, such as mass protests in D.C. and New York and the formation of the Museum of Censored Art.

While the censorship of Wojnarowicz’s piece is nothing short of archaic, its removal speaks directly to a long history of negation. Expressed both through the exhibition itself, and the controversy arising in response to the removal of Wojnarowicz’s portrait painting, Hide/Seek charts a distinctive lineage of how systems of power have contributed to the oppression of queer desire. By exposing a legacy of cultural erasure, Hide/Seek demonstrates the invaluable contribution of perseverance to queer pedagogy in art history.